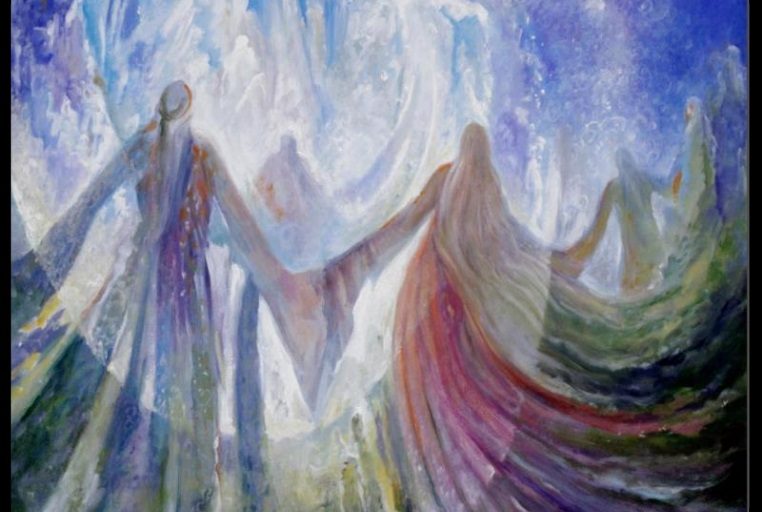 Time for My Own to Come to Me

Today, when I went to the Grandmothers to ask for a message for the next newsletter, to my everlasting surprise, the Great Mother was with them.  She stepped forward, and opening her arms, said, “Daughter, it is time.  Time for my own to come to me.  Much has gone into this moment,” she said when she saw how surprised I was to see her, “much preparation and work.”  I could only nod in agreement, while the Grandmothers, flushed with happiness, beamed on her.
“Now we will work together,” the Great Mother said, turning first to the Grandmothers and then to me, letting us know we’d all be working together now — the Mother, the Grandmothers and we humans.  The Grandmothers’ role of intermediary between the Divine Mother and human beings had at last born fruit.  She was here.  All along the Grandmothers had told me, “We have come to pave the way for the return of the Mother to Earth.  In life,” they’d explained, “first comes the Grandmother, and then the Mother.  So we’ve come in order that she may follow.”  And when I realized that THIS was the moment they’d been talking about, that the Mother is in fact HERE NOW, I began to cry.
“Yes,” the Grandmothers and the Great Mother said.  “You have long awaited this moment and so have we.  The time has come at last.”  As I watched them standing together, all I could do was gulp as tears kept pouring down my face.  I don’t think I’d ever realized what it would be like when the Mother returned.  What it would feel like, what it would mean for us all … In my mind, this had been something that would take place at some ‘far off’ time in the future, so now that the time had actually come, I couldn’t stop crying. Crying and breathing.  That was it.
“We will guide you,” they said when they saw my state.  And then they began to laugh; happy to see me so overcome with joy.  “Grandmothers,” I said, “I don’t think I really believed this would happen.  I mean, I wanted to believe it, but I think I always doubted — at least a little.  And now, to see you here, standing together … It’s more than this heart can take in.”
“We know, we know,” they chorused.  “You’ve been forced to live without your mother for so long, that you can’t fathom that She’s actually here. We understand.”  “It’s true,” I said, “but I want to fathom it. I want to believe it.”
“Be easy on yourself,” they said.  “Everything will happen in good time. You can take this in bit by bit.  Bit by bit,” they repeated, and then the Mother said, “Take all the time you need to absorb it.”  And laughing, she added, “I’ll still be here. I’m not going away.”
When I asked to understand more about the return of the Mother, she said, “The moment of my return has been a long time in coming and now that it’s here, it will change everything.  More will be coming,” she assured me. “Expect more, but right now, begin to work with me.  Think of me, call on me,” she said. “I will teach you how.”
Note from Sharon: I’m still absorbing this experience and though I have no idea what may occur next, whatever this ‘more’ is, I’ll pass it on to you.  In the meantime, all I can say is, this is a far bigger adventure than I thought.  Please fasten your seat belts.